Michele Spotti was born in 1993 and is one of today’s most appreciated orchestra conductors.
After graduating as a violin player he went on to graduate as a conductor under Daniele Agiman at the “Giuseppe Verdi” conservatory in Milan. He then continued his studies at the Haute École de Musique in Geneva, at the Gstaad Menuhin Festival Academy under Neeme Järvi and Gennady Rozhdestvensky, and in Italy under Gianandrea Noseda, Gianluigi Gelmetti, and Daniele Gatti.

Spotti made his debut conducting Le Nozze di Figaro at the Teatro Mancinelli in Orvieto. In 2015 he was selected by Turin’s CRT Foundation as emerging young musician to conduct Donizetti’s La Fille du Régiment.

In 2016 Alberto Zedda chose him as his assistant for the production of Rossini’s Ermione at the Opéra de Lyon, where he later returned to assist Stefano Montanari for a production of Cenerentola. He was then selected by As.Li.Co to conduct the 20th Edition of the Operadomani project, with more than one hundred performances of Il Barbiere di Siviglia all over Italy.

He has led several new productions, including Offenbach’s Barbe-bleue staged by Laurent Pelly at the Opéra de Lyon; Cimarosa’s Il Matrimonio Segreto with Pier Luigi Pizzi’s staging at the Festival della Valle d’Itria, and, again in Martina Franca, Richard Strauss’ Le Bourgeois Gentilhomme that opened the 2020 edition of the Festival; Il Viaggio a Reims at the Rossini Opera Festival in Pesaro; Adina and the world premiere of La Cucina by Andrew Synnott at the Wexford Opera Festival, both directed by Rosetta Cucchi; Don Pasquale in Montpellier; and Così Fan Tutte at Hannover’s Staatsoper.

Michele Spotti, at just twenty-seven, is one of the most brilliant conductors of his generation in the orchestral and operatic repertoires. After graduating with full marks in Violin performance and then in orchestral conducting at the Giuseppe Verdi Conservatory in Milano under the guidance of Daniele Agiman, he pursued Master’s studies in Italy and Switzerland with, amongst others, Gianluigi Gelmetti, Gianandrea Noseda, Neeme Järvi and Gennady Rozhdestvensky. In 2017 he was jointly awarded second prize (no first prize awarded) at the First International Opera Conductor Competition held by the Opéra Royale de Wallonie-Liège.

He made his debut at the age of just twenty one at the Teatro Mancinelli in Orvieto conducting Le nozze di Figaro during Laboratorio Spazio Musica. The following year he debuted with L’elisir d’amore at the Teatro Rosetum in Milan for the Voce all’Opera season.

In 2015 he was selected by the CRT foundation in Turin as emerging young musician to conduct la Figlia del Reggimento and was reconfirmed the following season to conduct The Gypsy Baron by Johann Strauss. He was assistant to Alberto Zedda in the production of Rossini’s Ermione at the Opéra de Lyon, where he returned as assistant to Stefano Montanari for La Cenerentola. Following this he was chosen by As.Li.Co to conduct the 20th edition of Progetto Operadomani, with a run of over one hundred performances of Il barbiere di Siviglia all over Italy. 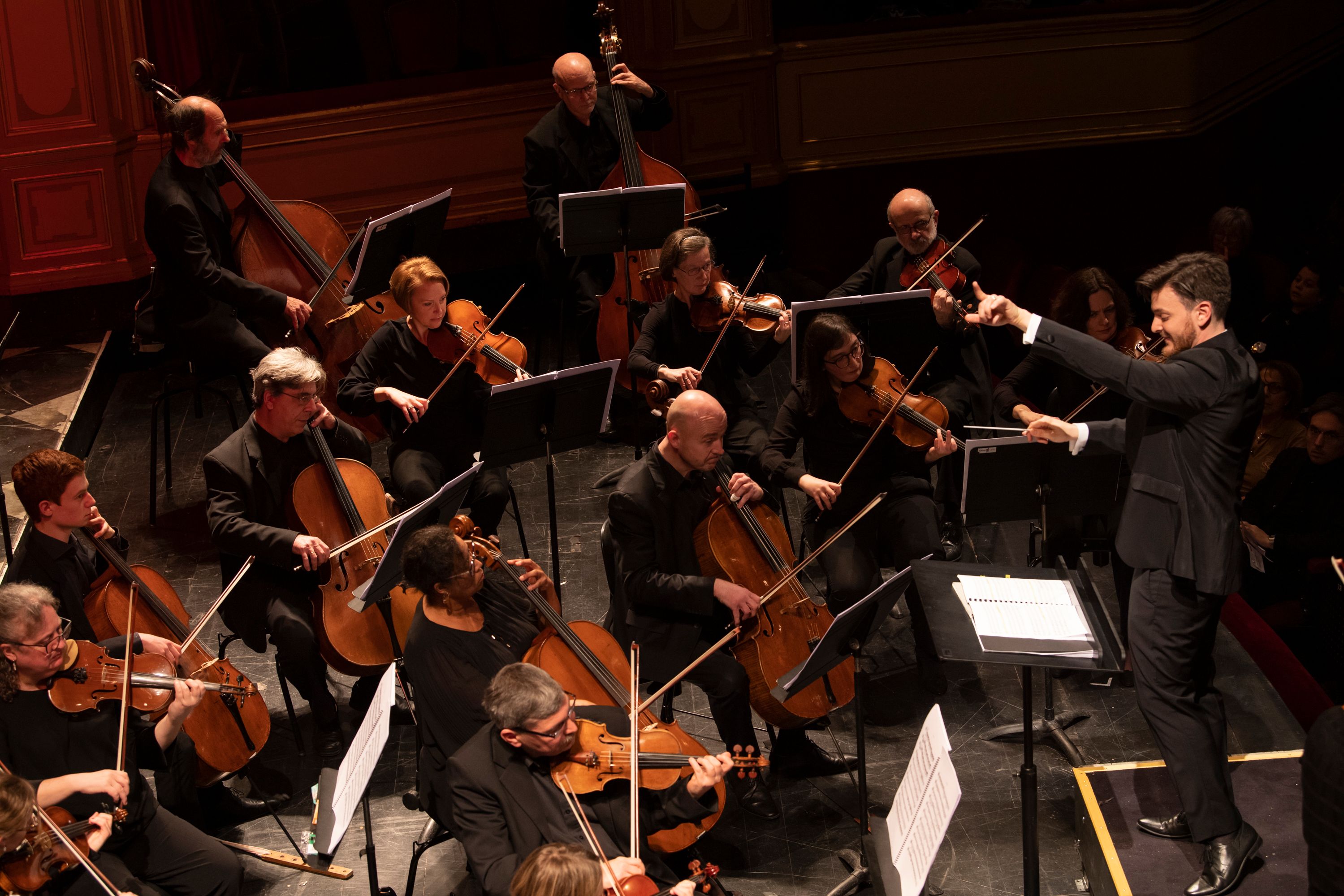 His most recent engagements include Beethoven’s Ninth Symphony at the 2020 New Year’s Concert, La Bohéme,and the 2019 Christmas concert at Hannover’s Staatsoper; Il Barbiere di Siviglia with Pier Luigi Pizzi’s staging and a concert of rare Rossini arias performed by Juan Diego Flórez at the 2020 ROF; Elisir d’Amore at the Teatro Petruzzelli in Bari; Hänsel und Gretel in Parma with the Orchestra Arturo Toscanini; a series of concerts with the Orchestre Buisonnier in Geneva and on a Swiss tour; Il Barbiere di Siviglia in Saint-Ètienne. He has enjoyed an intense concert schedule with several Italian theatres, including the Teatro Lirico in Cagliari, the Teatro Carlo Felice in Genoa, the Teatro Lirico Giuseppe Verdi in Trieste, the Teatro Massimo in Palermo, and with the Toscanini Orchestra in Parma, where he also performed as a violinist at a chamber concert with some of the orchestra’s musicians.

His upcoming engagements include La Traviata on 9 and 11 July at the Teatro Massimo in Palermo, with Pretty Yende playing the title role, and a new productionof Signor Bruschino, beginning August 10, at the Rossini Opera Festival where he will also lead the Orchestra Sinfonica Nazionale della Rai at the closing concert featuring Juan Diego Flórez. In November he will be leading a new production of La Fille du Régiment at the 2021 Donizetti Opera Festival, and in 2022 he will be conducting Don Carlos at the Theater Basel and Jean-Pierre Ponnelle’s historic production of La Cenerentola at the Bayerische Staatsoper in Munich.

His more recent engagements include: Il Viaggio a Reims at the Rossini Opera Festival (he has been a constant presence at the Pesaro Festival since 2016) and with Opera Lombardia; Hänsel und Gretel with the Orchestra Arturo Toscanini in Parma; Il Barbiere di Siviglia in Saint-Étienne; Il Viaggio a Reims at theatres in Como, Bergamo, Pavia and Cremona; Don Pasquale in Montpellier; Barbe-bleue by Offenbach, directed by Laurent Pelly, at the Opéra de Lyon; Il matrimonio segreto by Cimarosa, directed by Pier Luigi Pizzi, at the Festival della Valle d’Itria in Martina Franca; followed by the world première of La Cucina by Andrew Synnott and Adina at the Wexford Opera Festival, both directed by Rosetta Cucchi. He conducted the 2019 Christmas Concert and the 2020 New Year’s Day Concert (Beethoven’s Ninth Symphony) at the Staatsoper Hannover.

In January 2020 in that same theatre he conducted La Bohème for the first time. Theatre closures in France as elsewhere as a result of the Covid-19 pandemic caught up with him at the Opéra de Lyon on March 13th, date on which he was due to conduct Rigoletto for the first time. That has been followed by further postponements and cancellations resulting in constant updates to his schedule.

Nonetheless he is already back conducting in summer 2020: on July 14th at the Festival della Valle d’Itria in Martina Franca, which he inaugurated with Le Bourgeois Gentilhomme, Molière’s comedy set to music by Richard Strauss, adapted as a monologue in an original production (repeat performances on July 22nd and 25th and on August 1st). On August 16th and 18th he is conducting two concerts at the Rossini Opera Festival: one of lesser-known works by Rossini sung by Juan Diego Flórez, the other with the trio of buffo basses, Alfonso Antoniozzi, Paolo Bordogna and Alessandro Corbelli. In September he is engaged at the Teatro Petruzzelli in Bari with l’Elisir d’amore. He is back at the Rossini Opera Festival on 25th, 27th and 29th November 2020 to conduct Il Barbiere di Siviglia in the Pier Luigi Pizzi production and in 2021 for Il signor Bruschino in a new production with stage direction by duo Barbe & Doucet and to conduct the Gala concert with Bel Canto stars. Since December 2020 he has conducted a vast symphonic repertoire at Teatro Lirico in Cagliari, Teatro Carlo Felice in Genoa and at the Teatro Lirico Giuseppe Verdi in Trieste.